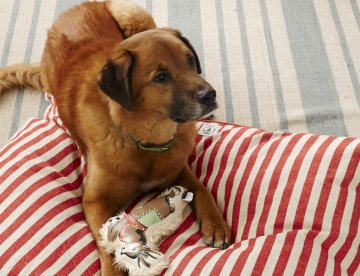 More than 7 million cats and dogs enter an animal shelter every year, according to the ASPCA. Giving one a new home is the ultimate in good karma, but myths about the adoption process still persist. Time to separate fact from fiction.

Fact: Although this may have been true in the past, most shelters today work hard to provide an enriching environment. For instance, according to Jessica Henry, executive director of the Allen County Society for the Prevention of Cruelty to Animals, dogs are regularly walked or participate in supervised play groups. Cats are entertained by bird feeders positioned within view or petted by volunteers.

Myth:If you have your heart set on a purebred, you're out of luck.

Fact: About 25% of dogs in shelters are purebred, according to the Humane Society of the United States. Some even come with papers, says Henry. She's had purebred French bulldogs and Great Danes, among others, come through her shelter.

Myth:The animals have health or behavioral issues. That's why they ended up in an animal shelter.

Fact: Of course there are some sick or behaviorally challenged animals, but the majority are healthy and well-behaved. They wound up in a shelter simply due to unfortunate life circumstances, such as an owner's death.

Myth:Pets in shelters are mostly old.

Fact: In certain parts of the country, there could be fewer puppies and kittens, Henry says. But thanks to programs like PetSmart Charities Rescue Waggin', which transports puppies and dogs from one area of the country to another in hopes of increasing their adoption odds, it's possible to find young animals no matter where you are.

Myth:It's too hard to adopt a pet. They make the process so difficult!

Fact: Most shelters have eased up on the rules. "We don't deny people pets for reasons like not having been in the same job for a full year or not having a fenced-in yard," says Henry.

Which Veripet Product is Right for You?

Easy Ways to Certify and "Know Your Pet"℠

Rabies Reader® app to access your Pawmit with your Avid Mini Tracker 3-B® microchip scanner.